One of the challenges when building a complex home flight simulator is finding good quality parts. You have two choices. Replica (or imitation) parts and real parts. What are the pros and cons of replica and real parts, what should you look out for, and where should you go to buy those simulator parts? Let’s find out.

Pros and Cons of Replica Parts

Replica aircraft parts are what you’ll most likely use to build most, if not all of your simulator, and it’s mostly what I have used to build mine. They usually look and function pretty close, if not exactly like the real thing.

The great thing about replica parts is they are almost always plug-and-play these days. It’s a far cry from the early pioneers who had to figure it all out from scratch. My hat’s off to them! This means it’s much easier today to integrate replica parts into your simulator with a minimal amount of effort.

Replica parts “may” be less expensive than real parts, but that’s not always the case. However, it’s usually much easier to integrate replica parts into your sim than real ones.

Some cons are that replica parts are generally not built to the same robustness as their real counterparts which are meant to withstand heavy abuse. They also may or may not be as accurate looking or functioning depending on how much you spend, and they may be less reliable lacking the robustness of real parts. Since a home sim doesn’t typically experience the same abuse as a real aircraft that’s usually just fine.

Replica part interfacing is pretty straightforward. There are many types of interface boards you can buy that are USB or Ethernet based. They have associated driver software that allows the board to communicate with inputs and outputs to the board. Boards such as those from LeoBoadnar, FlightDeck Solutions, Pololu and Phidgets, for example, can take a physical input, such as flipping a switch, and have it trigger an event on your computer. Or, take an output from the computer to turn on an LED or move a gauge needle.

Other simulation software, like the Prosim Avionics Suite, have built-in drivers that support many different hardware interface boards. All you do is plug the board into your computer via USB and Prosim will recognize it. When you flip a switch connected to the interface board, Prosim will “see” the event and let you assign it to some action within in the software.

Where to Buy Replica Parts for your Home Flight Simulator

If you’re looking to buy replica simulator parts, I would say make sure you do your research. Often it’s harder to mix and match from different vendors due to compatibility issues. Therefore, I recommend you look for vendors with a large selection of parts at the quality you need. I’d also suggest looking for companies nearest to you. This way you can stop by and see the parts before you buy. Also having them close means their support is in your local time zone and language. It’s always hard having to wait a half day before you get an answer for an issue you’re facing.

Since my sim is mostly replica parts, I am pretty familiar with most of the big replica parts vendors. You can find a list on my Links page. Most of them are based out of Europe, and most do a decent job of replicating real parts.

The majority of parts in my sim come from the Canadian company Flightdeck Solutions, which does a very good job of replicating parts from the aircraft they model. I’m not being paid to say that nor receive any special compensation. I just speak from personal experience. I’d say they are 90-95% accurate visually and generally quite solidly built. Their support is usually very responsive and they’ve been around a long time, which is why I have stuck with them. Something that is very important in this hobby. But obviously there are many great replica companies all over the world.

Sometimes you need parts that are more robust than those made by a replica vendor. A good example is the Fire Panel on the Boeing 737 pedestal (see Figure 1). Replica parts may not hold up very long to hard pulls and twists on the handles. This is where real parts come in handy.

But where do you find real parts? And how do you get them to work with your simulator software? Therein lies the challenge with real parts.

A big problem we have today is sim enthusiasts will often pay top dollar for real parts.

One reason is because buyers don’t know what the parts are worth, and are therefore easily scammed.

Another cause is demand for real parts that has skyrocketed over the last decade. Newer generation aircraft are mostly still in service today, so when one is retired any parts not re-used get bought up quickly. This has led to a scarcity in high-value items like seats, yokes, and throttles. Something sellers have been able to capitalize on.

The price dilemma won’t be solved until simmers become more savvy about what parts should cost.

Keep in mind, an aircraft salvager has go through a lot of effort to get parts out of an aircraft. They have real costs to pay, and often significant manual labor is involved. So it shouldn’t be a surprise that certain parts will just cost more.

Next, Will it Fit in Your Simulator?

Real parts are usually much deeper than their replica counterparts. They are usually in rectangular housings to protect the interior parts. In Figure 2 you can see how deep a transponder panel goes.

Let me give you an example. Figure 3 shows a real ADIRU (IRS Panel) on the left and a replica on the right. Note the difference in depth. It turns out I didn’t have enough clearance in my FlightDeck Solutions cockpit shell overhead to accommodate it. I would have had to cut open the ceiling panel to make it fit, something I wasn’t willing to do. So I went with a replica part instead.

This is where it gets tricky. Real aircraft parts weren’t designed to be plug and play with your home flight simulator in the sense we know it. Avionics parts communicate using an aviation standard bus protocol such as ARINC 429 (Aeronautical Radio, Inc) .

Without going into a lot of detail, you normally can’t simply connect a real aircraft part to an interface board. Instead, you need specialized communication boards and software, like those from CockpitConcept, to interpret the ARINC commands into something the computer can understand.

You can also try to remove the internals and reconnect the switches, lamps, and dials to an interface board. I had someone experienced at doing this convert my real fire panel for use with USB (see Figure 4). He did a fantastic job and kept everything nice and neat inside the unit. It was a lot of work, however, so this route is not for the faint of heart!

Where to Buy Real Parts for your Home Flight Simulator

eBay is often one of the few places for us mere mortals to look. Builder forums like Cockpitbuilders.com or the Prosim Forums have “For Sale” sections that often have real parts for sale. Other sites, like the historical aviation site Once Aloft, offer salvaged parts for sale.

If you’re lucky, you know someone in the salvage industry who can hook you up with a good deal. That’s pretty rare.

Finding parts for your home flight simulator cockpit can be a daunting task. Most of us will start off buying replica components when building our sim. There are many suppliers, most located in Europe, who make replica parts. When it comes to at least the Boeing 737NG or Airbus A320, replica parts are plenty. See my Links page for a list of vendors.

However, if you’re looking to buy real aircraft parts for your simulator, keep in mind that they are often hard to find, difficult to convert, and may not always fit. eBay and builder forums are likely your best bet at finding them second-hand, but establishing a relationship with a good salvage yard will be the optimal path. And certainly, there’s nothing like the real thing! 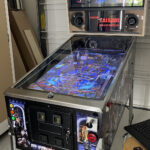 I created this site for enthusiasts to buy and sell their simulator parts for free. No gimmicks, no tricks, it's just easy. Visit https://www.ineedsimparts.com

Flight Simulation Association (FSA) is an association of flight simulation pilots, virtual air traffic controllers, and developers and content creators. By joining, members get access to exclusive product discounts, webinars, guides, and the ability to search for and find nearby simmers. Learn more and subscribe at www.flightsimassociation.com!