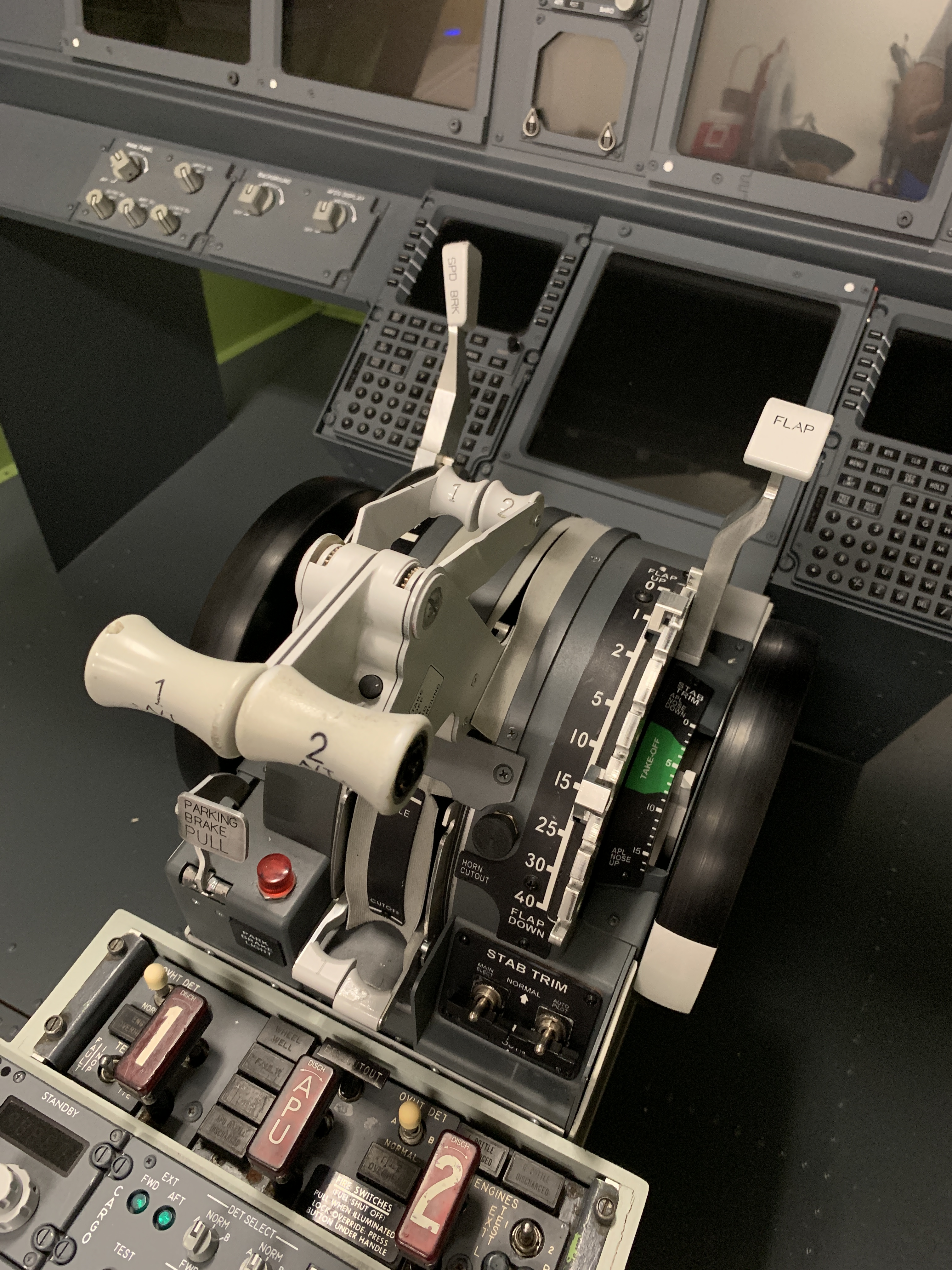 The Throttle Quadrant (or TQ) is obviously a critical piece of kit in your cockpit. And while it looks fairly simplistic from the outside, it’s actually a very complex piece of machinery and electronics. The trim wheels rotate at various speeds, the trim needles move accordingly, the throttle advance and retard with the auto-throttle engage, but need to be able to be overridden if necessary. The spoiler handle automatically moves to the fully extended position on touchdown, and the reverse handles have lockouts to prevent accidental deployment, as do the spoilers. The parking brake automatically disengages when you firmly depress both rudder pedals. And of course the flaps handle, disengage switches, fuel flow levers, and more are all part of this thing.

While there are vendors out there who make faithful recreations of most, if not all capabilities of the real thing, we’re talking big money to buy one new. At least $5K USD plus shipping. I could probably try and source a real TQ, but 737NG TQ’s are hard to come by and then they have to be adapted to work with a simulator. That’s an expensive proposition as well.

So to keep things affordable, I started out with a non-motorized Jetmax TQ that I bought used from someone on the forums (years later, ironically it sold back to the person who sold it to me!). It met my needs for a while. Ultimately, though, in the back of my mind I really wanted a fully motorized one. Don’t we all!

I eventually found someone selling a used fully motorized Revolution Sim (RevSiim) throttle for half the new price of new and thought maybe it was time to bite the bullet and spend some money so went ahead and took the gamble.

This TQ looked more realistic than my Jetmax and it was motorized, so I was excited to get it hooked up. But the first problem I encountered was the lack of support and drivers to interface with Prosim. When the owner of RevSim packed up and left town, he left a half-completed piece of beta driver software that no one had the source code to continue maintaining. As such, the software was unreliable, and only some of the functions worked properly.

Fortunately I was able to get things working to where the auto-throttle worked ok (not great, but ok), as did the spoiler handle. The trim wheels also functioned ok and the flap lever worked, but due to the way the software interfaced with Prosim, the flaps in the sim moved way too fast. The parking brake and critical fuel cutoff levers, however, didn’t work right with Prosim, nor did the stab trim switches. And the software was unreliable and would stop working with Prosim.

Eventually all these little nagging issues got the best of me and despite the impending dread, I tore the entire thing apart. I first tried to fix some little things here and there, but the more I worked on it, the more I came to the realization that this TQ would need a complete tear-down to work the way it should.

I’m now in the process of replacing the slip-belt drive auto-throttle drive mechanism with an adjustable poly-clutch slip clutch and some 3D printed gearing, and replacing all of the electronic boards with Polulu DC motor boards and LeoBodnar cards. Who knows what else. I’m figuring it out as I go. All to try and save me from buying a new TQ, which I have the sneaking suspicion I will have to do anyway.

I will keep you posted on my blog as I hopefully make progress. Wish me luck!