I have always had a dream to fly.   I remember passing by Kai Tak airport in Hong Kong in a school bus as a kid and climbing over everyone to get a clear view of the runway as a Cathay Pacific Boeing 747 passed overhead on final.  I wanted to know everything about the 747 and with the couple of Cathay 747 pilots in our small neighborhood, I picked their brains every chance I could. 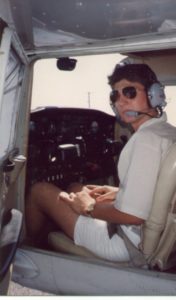 At 15 I started flight lessons out of KISP (Long Island McArthur Airport) in the busy New York airspace.  At 16 I solo’d the Cessna 152 I was learning in.  You couldn’t wipe the smile off my face when I got back from that first solo flight.  I couldn’t even drive the car alone to the airport.  My dad had to drive me most of the way until we crossed the county line where it was legal for me to drive with an adult in the passenger seat.  So we’d switch seats.  Then I’d get in the Cessna and fly off on my own.  Crazy!

I solo’d at 17 and spent the next year flying around the New York area, flying out to the end of Long Isand with friends and circling the lighthouse there or spending the day at Block Island beach.

When I graduated High School, I was off to the Air Force Academy where I had hoped to fly for the military.  I got a chance to learn to fly gliders, and got an incentive ride in a T-37 trainer jet, a highlight of my Academy time. Unfortunately, things didn’t quite work out due to an unexpected medical turn of events, and I was grounded permanently from military flight.  So I never did make it to the Academy’s more advanced pilot training and beyond.

Flying was all I ever wanted to do, and the primary reason I went to the Academy, so I suddenly had to find something else to do.   After serving my commitment in the military I decided to move on to a career in Information Technology.

Sadly, I never did get back to pursuing my real world flying as my computer career and a side business took off leaving little time for anything else.  It has now been over 20 years since I last flew a real aircraft.  Maybe someday I’ll get back to it.

In the meantime, my passion for simulated flight has only grown.  From the early days of SubLogic Flight Simulator all the way to today’s Prepar3d, I have followed the simulator world closely.  I always had a desire to fly more than my desk, but it was always beyond my reach in terms of time, skill, and money.

But over the last few years building a full sized simulator has started to become a fantastic possibility.  Vendors are producing ready-made parts and computer hardware that make it much easier to build and operate a great simulator.   And suddenly my vision started becoming a reality.

By this time the Boeing 737 had become such a popular sim for people to build because of the availability of parts and small size, but it’s also an extremely versatile aircraft that can get in and out of small and large fields alike.  There’s still an old-school overhead but it has modern avionics.  It’s still being produced in large numbers today, and continuously being updated.  And it’s arguably the most popular jet of all time.  Certainly one that is a workhorse of the industry.  So naturally I gravitated toward that air-frame and it  became my favorite aircraft. 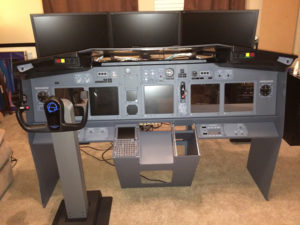 I had always owned a yoke and rudder pedals, but they were only mediocre.  I procured a Precision Flight Controls Saab yoke and later a 737 yoke, along with some decent rudder pedals flying PMDG’s 737NGX, but that just wasn’t enough.  Having had real-world flying experience, nothing felt very “real” yet.  I wanted something I could sit in and feel immersed.   I wanted to reach for switches, turn knobs, push buttons.  FEEL connected.  That’s when I decided to start building something more significant.

It has been and will continue to be a long road.  Which is why I decided to call this site the My Never Ending Sim project.  Because at times that’s exactly what it feels like.  There’s ALWAYS something more to do, to try, to redo when something better comes out, to remake into something better, and so on.  This is definitely one of those “the journey is more important than the destination” things and that’s ok.  It’ll be done when it’s done.  In the meantime it’s a serious labor of love. 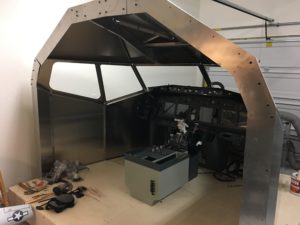 If you’re looking for advice, I’ll try to impart what I have learned during my process throughout this site.  Other builders are far more advanced than I.  I’m not an expert at wiring, nor wood building, nor aircraft systems, etc.  But I do have some engineering skill and the ability to think through designs.  That doesn’t mean I don’t make mistakes (I make plenty) and wish I had done things differently in hindsight.  That comes with the territory.  There is always a better, more efficient way to do things.  Sometimes you have just have to do to learn what you didn’t know so you can do it better next time.

Remember, this is a HUGE time investment, I mean HUGE.  There are so many aspects to this hobby that take time to learn, design, build, and implement that it will take time AND MONEY.  You can do it “cheap” and you can go all out and spend a fortune.  It just depends on how realistic you want to be and balance that with your budget. 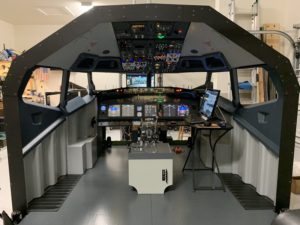 Also remember, depending on how obsessive you are about it, this hobby WILL strain relationships.  Significant others rarely understand the commitment and time needed to build something like this so make sure they understand what you are trying to do and what it will take, and that they are comfortable with it before you start or you may regret it later.  Don’t forget to stick your head out of the sim room regularly.  You’ll be amazed how fast time flies when you are engaged in this hobby.

By the way, if you’re wondering where my handle “MistyBlue” comes from, that was the name I gave to my old Harley Davidson which was a beautiful deep blue.